We Are Loving Ramps to Extinction

Allium tricoccum, Ramps or Wild Leeks, our most famous wild onion, is at risk of us loving it to extinction. Local ramp festivals are a commonplace celebration of spring up and down the east coast, rich in tradition. They are delicious and when you find a patch, seem so abundant. Most folks think when they hit the motherload patch, “there’s SO MUCH here, let’s take more!” The problem isn’t with one person doing this it’s the tens of thousands of folks out harvesting.

With more and more people interested in edible wild plants, more plants are being harvested at a rate the plant populations cannot regenerate. In 2011, ethnobotanist, Lawrence Davis-Hollander wrote, “an estimated two million wild leek plants were harvested from the wild.” The concerns prompted the New York Department of Environmental Conservation in 2012 to work on a plan to monitor wild leek populations and develop guidelines for plant conservation practices. The population of ramps in NY is declining so rapidly that harvesting is now forbidden.

If you’re a person that doesn’t want the government telling you what to do, how about the plant people, herbalists, asking you to think about the next seven generations of people and plants? United Plant Savers, a grass roots organization with “a mission to protect native medicinal plants of the U.S. and Canada and their native habitat while ensuring an abundant renewable supply of medicinal plants for generations to come,” has placed ramps on their “to-watch” list.

What’s the big deal you might ask? It’s all about the life cycle of the plant itself. Allium tricoccum are long-lived perennials, taking at least seven years to have sex or produce seed if you want to be physiologically correct. Since most people harvest the entire plant, including the bulb, the older plants will not be around to make more seed, thus repopulating the area. The plant does not flower until later in the season, after folks have harvested so harvesters have no way to know which plants are old enough to be producing seed.

What can be done? The Hudson Ramp Festival has pioneered sustainable harvesting practices that United Plant Savers supports. They are: 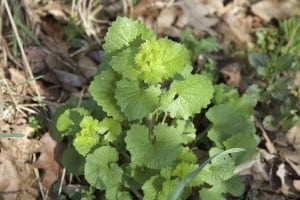 It’s my belief that if people know a little more about this beautiful wild edible, they will practice sustainable harvesting techniques, thus preserving our wild heritage. Please pass the info on to others.